editor October 18, 2020 Sponsors Comments Off on The Bounce Back Tour will get you into the Mindset that will Change your life and 798 Views 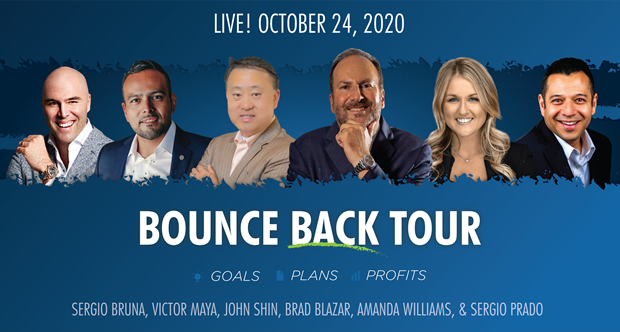 help you deal with COVID-19

Build your plan to “BOUNCE BACK!”

This LIVE event (or virtual) is for those wanting a plan to bounce back from COVID-19 or simply building the life they want – in addition to creating a roadmap that you can put into practice from world class entrepreneurs and top business minds.

The conference will give you benefits such as making new business connections, learning the moves and strategies to significantly increase your business,  getting into the mindset that will change your life entirely, starting the mission that will lead you to countless successes and  make you walk away with wealth strategies.  Learn from top millionaire speakers and world class coaches.

The motivational and highly inspirational experts that will be lined up for this conference include Brad Blazar – Founder of The Art of Beliefology™. Brad is an accomplished author, speaker and coach who is the founder of BEAST Nation – a community of success minded people who refuse to live in a spirit of fear. His podcast BEAST Nation was recently ranked by Yahoo News / Yahoo Finance as the 2nd highest ranking show to help people cope with COVID-19.

As the former CEO of a small oil company he started at the age of 23, Brad has had encounters with thought leaders like George W Bush, Joe Namath, Kevin O’Leary, Earvin “Magic” Johnson, Fran Tarkenton, Oliver North amongst others and writes about this in his #1 rated book for entrepreneurs On the Wings of Eagles – Learn to Soar in Life. Brad has been hosted on some of the largest podcasts around the world and has been a frequent speaker on the subjects of raising investor capital to build, buy or scale your business.  Today, Brad is known for his trademarked philosophy known at The Art of Beliefology™ – Change Your Beliefs and Change Your Future.

The second expert is Sergio Bruna, America’s Most Influential Latino Entrepreneur. Sergio Bruna is an entrepreneur and salesman originally from Madrid, Spain, who moved to Mexico City as a teenager to work and live on his own. By the time he was 20, he had already been homeless twice, which pushed him to move to the United States at the age of 21. Flash forward to today, and he is now the “Grant Cardone of Latinos,” the top Latino Entrepreneur.

Sergio launched a late night show called, “El Pelado de la Noche” which was aired on prime time television. When he stopped making his TV show, he chose to go back to sales by focusing on Renewable Energy. After 9 years of specializing in this area, Sergio has become one of the top players of the industry, having sold more than $600M dollars of solar energy.

Today, Sergio represents General Motors and Chevrolet in the Latino market, and has shot over 100 TV spots as the face of the brand in addition to being interviewed by Larry King Live. He also speaks in multiple events across the U.S., driven by the desire to inspire others to become the best version of themselves.

Also Victor Maya, who when he was six years old was smuggled alongside his brother and sister from Mexico to Houston, Texas. Her mother had worked herself to the bone to pay “coyotes” to bring them across rivers and open desert to the United States.

He was plunged into a culture where he didn’t speak the language, understand it’s customs or look like the other kids in school. From the start, he was an outsider. But this gave Victor advantages migrant leaders know best: he became a keen student of people and was hungry to conquer the obstacles stacked against him. His fascination with human psychology propelled him from a scrappy, street smart hustler to a seasoned successful CEO and founder of multiple companies. However, the lessons he learned in the streets still resonate in his programs today. In his book Conquer Victor shares his amazing journey and secrets to his amazing success.

These are just a few of the experts that will be performing on this amazing Bounce Back Tour so do not miss out.

First of all, what is a smart home? A smart home uses automated devices and …